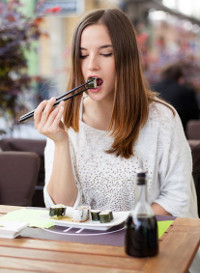 Embarrassing moments can strike at any time.

For example, many years ago, my brother and his girlfriend were enjoying lunch at one of those sushi places where the dishes come around on a conveyor belt. Whenever you’re ready for your next bite, boom! there’s fresh food floating by right in front of you. You just reach out to the conveyor belt and scoop a plate off it.

Personally, I love a good sushi train. But on that fateful day, something unexpected happened.

Oh, Soy Can You See?

Somehow, one of the plates that had already gone past caught the corner of something.

Soon, the plates behind it started piling up. Then, with a noisy clatter, plates started falling and spilling their contents … right onto the table where my brother and his girlfriend were seated.

My brother, recognizing that he and his girlfriend hadn’t caused the accident, hardly flinched. However, his girlfriend all but disintegrated into a puddle of embarrassment.

And it’s true: Millions of people would have been embarrassed by what happened, even if they weren’t the cause of it. It’s as if it happened to them instead of just happening near them.

If you belong to that slightly more sensitive tribe, you’ll want to read my article below. In it, I talk about new research on how to keep yourself from drowning in embarrassment when “soy” happens.

Here it is: Embarrassed? Here’s How to Get Over It Quickly

(And when you’re done with that one, circle back here and read why shame is a useless emotion.)

4 thoughts on “Read This ONLY If You’re Easily Embarrassed”