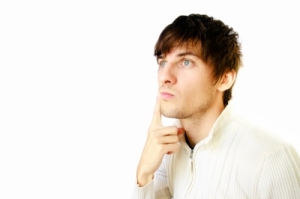 Making decisions is hard for many of us, and I’ve often heard that it’s because in order to pick one thing, you have to rule out all the other things you could do.

That’s true, of course. And it’s a bummer.

But there’s another factor that I’ve seen trip people up when it comes to making a decision.

(I’m sure it trips me up, too, but you know how it is. It’s easier to spot when it’s someone else.)

It’s hard to make a decision when it rests on another decision you have yet to make.

I teach a goal-setting essentials class where we look at common traps that stymie decision-making.

The trap I want to talk about today is this: You focus on a decision that may be hard but seems easier than the one that really needs to be made first.

Let me give you an example.

A man attended my decision-making class in order to decide whether to build an addition on his home. It soon became clear that he and his wife hadn’t yet decided whether to stay in their home or downsize and move somewhere else. In fact, this was a point on which they couldn’t agree.

Until the stay-or-go decision was made, the man understandably had trouble deciding whether to put money and effort into building an addition.

Building would mean staying put … only they hadn’t decided that yet.

Whenever you find yourself grappling with a difficult decision, back up and ask yourself if there isn’t a different decision you need to tackle first.

Some situations require a multitude of decisions, about career, relationship, kids, home — the whole tamale.

In this case, take some quiet time (if you’re an introvert) or get a friend to help you (if you’re an extrovert) and figure out the chronology of decisions that need to be made.

There’s a logical order that should reveal itself with careful attention. If not, order decisions according to your values, with the most important decision coming first.

Once you’ve figured out your priorities, you can deal with what’s directly in front of you.

This process won’t make a truly difficult decision easy — sometimes you have to decide between two perfectly equal options — but it will clear the muddy waters so you can put all your energy into the right decision at the right time.